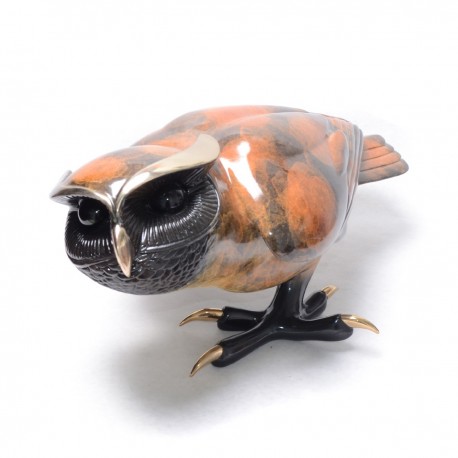 Shakespeare by Tim Cotterill Frogman is a large beautiful sculpture.  Tim's owls are highly sought after.

This product is no longer in stock

Through the centuries, owls have been known as a powerful  symbol of the wise, with their human-like faces and both eyes facing forward.  In Greek mythology, the owl was associated with Athena, the Goddess of Wisdom - hence the "wise old o

The very first bird sculpture that I made was a welded steel owl in 1972. It was a very simple design, and over the next twenty years, many more "one-of-a-kind" steel owl sculptures were made.  Twenty six years later, in 1998, I created my first stylized bronze owl named "Big Foot," due to its oversized feet. My second bronze owl, "Cromwell" was released in 2012 and sold out quickly.

The demand for my bronze owl sculptures inspired me to create  "SHAKESPEARE," forming the start of my PARLIAMENT of owls!